Pension funding has to be strong in order for health care to be viable through the Ohio Public Employees Retirement System (OPERS), according to OPERS Executive Director Karen Carraher. 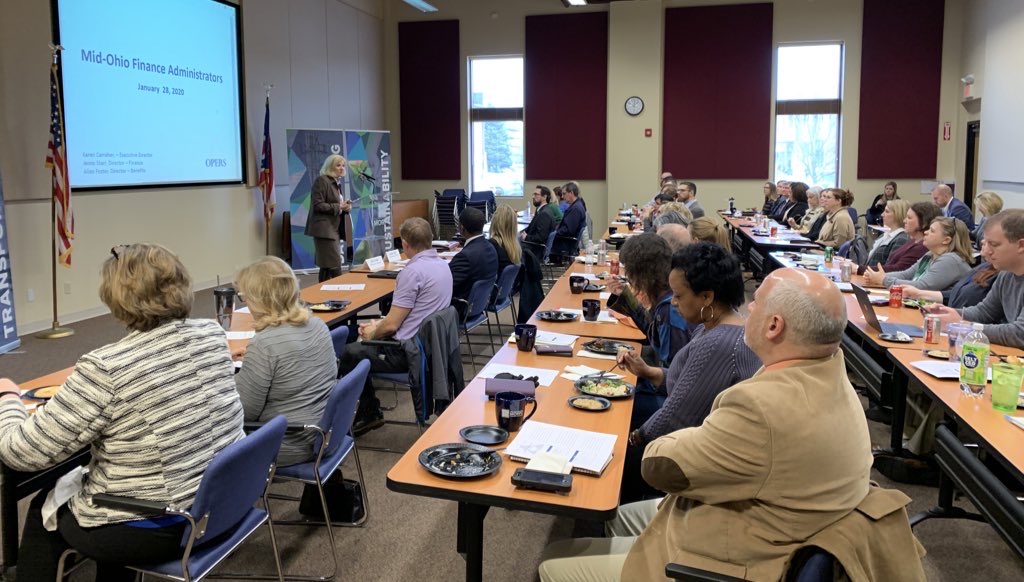 Carraher and her OPERS colleagues – Director of Finance Jenny Starr and Director of Benefits Administration Allen Foster – were recently on hand at a special Mid-Ohio Finance Administrators (MOFA) meeting at the Mid-Ohio Regional Planning Commission (MORPC).

OPERS is Ohio’s largest public pension system and the 12th largest such entity in the United States. Most state and local government workers in Ohio are paying into it. With recent news of the OPERS Board of Trustees voting to make changes to the health care benefits of current and future retirees as a way to prepare for the future, there was great interest in the information OPERS was sharing at the MOFA meeting.

“MOFA is a quarterly forum of finance officers and administrators from MORPC-member local governments that meets over lunch four times per year, but we opened this meeting up to include human resources representatives, as well as visitors from other areas of the state so they, too, could learn about the OPERS changes.”
MORPC Director of Finance Susan Tsen

Carraher covered topics such as actuarial basics, managing unfunded liabilities, the current and future state of health care, and funding projects for the pension and health care programs.

“In order to fund it we have to make assumptions, and we always want to know that our assumptions are good.”
OPERS Executive Director Karen Carraher

OPERS reviews the assumptions every five years. But it currently faces the problem of not having enough funding for health care in the future, which is what led to the board of trustees’ recent decisions to address challenges to maintaining adequate funding levels. The goal is to keep the health care trust fund solvent, and that means reducing health benefits for workers when they retire and current retirees.

Surveys have indicated that OPERS members are willing to accept changes or reductions in health care in the interest of preserving it. According to the OPERS presentation, “The overall goal is to design a flexible but predictable health care program that can provide funding for all eligible members based on its long term available funding.”

The OPERS board had also voted for a freeze to cost of living adjustments in September, but that change requires legislative approval – a process that has typically taken around three years

In the meantime, OPERS is communicating all of the changes through attending meetings, providing educational materials, posting on social media, and partnering with its members and other stakeholders.

Those interested in learning more can visit opers.org. If you would like to receive updates through the OPERS Board Report e-newsletter, ensure you have an e-mail linked to your account on the OPERS website. Otherwise, you can call OPERS and have your e-mail address added.

The next MOFA meeting will be Tuesday, April 14, 2020, and the topic will be Fraud in Government: Protect the Public’s Money. This session will address recent frauds that have occurred in the public sector, including trends and key risk indicators. Fraud is pervasive and can have severe financial implications, as fraud losses are rarely recovered. Using actual case examples, this interactive session will teach you how to spot red flags indicative of fraud and will address best practices for the design of internal controls to help mitigate the risk of fraud in your entity. Save the date!