Officials from the City of Lancaster, regional, and state officials gathered streetside in downtown Lancaster on South Broad Street to unveil the new “Southern Gateway” project on Tuesday, October 18. The project is aimed at improving accessibility and mobility in downtown Lancaster and introduces reverse-angle parking to residents to improve safety. 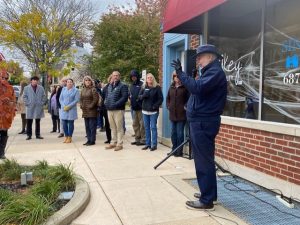 The downtown project encompasses resurfacing to add a bike lane, accommodate safer parking, and repair sidewalks for ADA compliance. Additionally, the project brings a new type of parking configuration to the corridor − reverse angle parking − and active transportation infrastructure. Sidewalk improvements and curb-cut changes will improve access for those with disabilities, a welcome addition as the headquarters of the Southeast Ohio Center for Independent Living is in the area.

“The Southern Gateway project is a welcome addition to the redevelopment that is occurring in that neighborhood, and it demonstrates the City’s support of that investment. The fast-track approvals and construction of this project is a testament to the collaboration among many parties including MORPC, CORPO, ODOT, two contractors and several city departments.”
Lancaster Mayor David Scheffler

Through an innovative funding process, the City was able to tap funds from the Central Ohio Rural Planning Organization (CORPO) through the Mid-Ohio Regional Planning Commission (MORPC), Ohio Public Works Commission (OPWC) funds through the Ohio Department of Transportation (ODOT), and Community Block Development Grants (CBDG) through Housing and Urban Development, in addition to local funds, to create the improvements.

"This project came together quickly, and we are proud of the effort to make that happen. We look forward to continuing to work with Lancaster and Fairfield County and funding worthy projects through CORPO, such as this."
MORPC Transportation Study Director Nick Gill

To learn more about CORPO, visit us online.